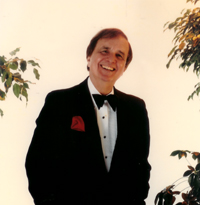 Raul Azpiazu is a unique and versatile artist whose distinguished singing career includes performances at the White House and Windsor Castle in England. He is the son of DON AZPIAZU, a renowned pioneer of Latin American music throughout the world.

In the “New Era of Tango,” Raul Azpiazu and arranger Horacio Diaz revive the romantic spirit that gave birth to Tango many years ago.

The music is intimate and emotional, interweaving both Tango and Bolero with strains of the Habanera, the Andalusian Tango, and Milonga. Listeners will be delighted by the variety and richness of experience in this important new vision of Latin American music.

Contributors on the Album

Lidia Alfonso de Fonteboa Lidia was born in Arcos de Canasi (Matanazas); Cuba. She was a teacher and director of schools and a graduate of Doctor of Pedagogy of the University of Havana. In the United States, she obtained two masters: the Arts and Education and in the Educational Sciences.

She was selected in numerous anthologies in English and Spanish, such as “107 Poets of the Cuban Exile, Contemporary Cuban Poet and Poetic Anthology Hispano-American” published by the Academy Poetics of Miami.
Her poetic work won awards in competitions in various U. S. cities. In 1990, her book of Poems called “Nuevos Suenos (New Dreams) was published in new York.
As a good friend of Horace Diaz, one of our arrangers, she wrote the lyrics to “El Collar De Besos” a song Horace had written and “La Cintas Blancas”, a song written by N. Gounaris featured in the album ” La Nueva Era Del Tango”.
Her latest book of poetry anthology is entitled: “Dreams of Yesterday and Today”.